According to all operators, this has had a concrete impact on telecoms: the rise of instant messaging and internet calling applications has reduced traditional calls and SMS messages.

In 2011, Microsoft bought Skype to the tune of $8.5 billion under the very noses of Facebook and Google, who were also interested. Not discouraged, Facebook bought WhatsApp in 2012 for $19 billion, although it had launched its own instant messaging service called "Messenger" in 2011. Google responded to this in 2013 with the creation of Google Hangouts, an instant messaging and video conferencing platform.

Users abandoned traditional telephony and were attracted by the promise of free messages and (video) calls, in spite of the reduced quality of communication and, until recently, non-compliance with the rules in force on personal data (fact corrected by GDPR). The opinion shared by most actors is that instant messaging is gradually eradicating SMS and video calling applications are replacing voice calls. 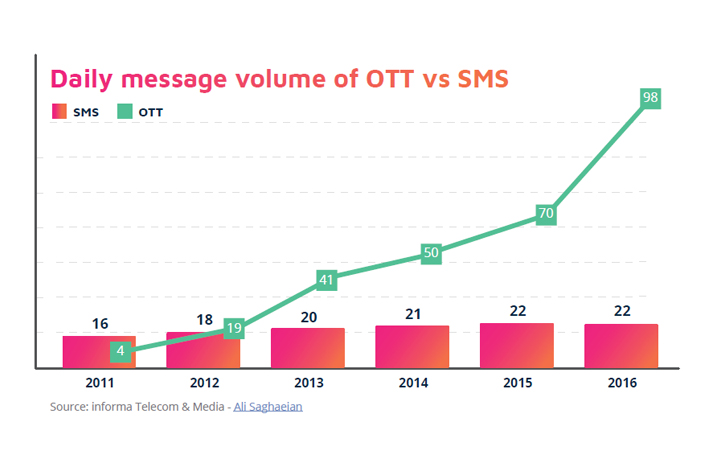 However, this is an idea to be (substantially) tested!

Why this new use?

This is partly because of free access and especially more varied formats, for example, group conversations and rich content (videos, GIF, emoticons, stickers, etc.). WhatsApp does not eliminate SMS, it rather created a new conversational use.

On the other hand, the overall volume of voice traffic on mobile phones remained roughly the same between 2010 and 2015, with the decline per capita income compensated by the increase in the number of users. (source: Ericsson Mobility report 2015 Q3). Paradoxically, even if it is difficult to measure, instant messaging has probably had a greater impact on calls than SMS messages. The dynamism of some developing markets and the increasing use of A2P SMS (transactional or marketing text messages sent from web/mobile apps) maintained the global demand for SMS.

But the impact is clearer in mature markets

All in all, the impact of GAFAM on the voice and SMS market must be tested: it has not been as significant as one can imagine, at least during the first few years. Indeed, the real impact on SMS waited was a 2 step dynamic. A first one at the early stage of instant messaging and one in 2016. In mature markets, the SMS have significantly decreased. In the US for instance, the volume of SMS decreased by 12% throughout 2016, after a 3 years stability.

Ready to answer with the RCS

But the telecom operators have thought of an answer. Organized by the GSMA, a new protocol has been developed: the Rich Communication Services. This protocol enable new forms of media in an SMS-like communication: video, group chat, sharing your geolocalization… These SMS 2.0 even have seduced Google who’s seeing them as a good opportunity for them to stay in the race. This could the start of an interesting cooperation between GAFAM and operators…

Why has EU adopted a new regulatory framework – the European Electronic Communications Code?